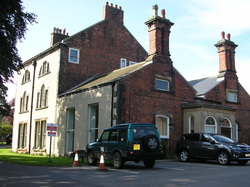 The Manager of the Ace of Clubs public house has obtained video recordings of an orange orb-like ball speeding across the back room and of a figure lurking behind the taps. Objects have also moved of their own accord in the bar.

In the earlier part of the 20th century, at the Antiseptic Dept, people sometimes used to hear a door open and shut, then footsteps and something being rolled, with a little heavy breathing thrown in.

Ashdown Drive Estate, Walton
One house on this estate has an unusual atmosphere on the upstairs landing. On a few occasions whilst the owners have lived there, they have heard unusual knockings coming from upstairs whilst they are both in a downstairs room. The house is detached and there did not appear to be a rodent problem.   It is possible, of course, that there is a plumbing problem.

In the days when this building was Ashgate Hospital, the image of a man dressed in Edwardian clothes was seen, often next to the fireplace in the reception room.

One evening, a patient was seen by a nurse putting on a dressing gown. When she went to see why the patient was out of bed, the image disappeared. After the death of one particular patient, the familiar and distinctive patter of his footsteps was often heard around the ward at night.

On one occasion, three young, male, convalescing patients reported to a nurse that they had seen a nurse in a long, grey dress the previous night and that she had walked right through the fireplace.

Since the premises have become a hospice, two members of staff, Theresa and Pam, have had their names called out. Footsteps are heard in the old building when no-one is in the area. One member of staff was trying to find the light switch one evening in the dark, when she felt someone brush against her hair. Laughs have been heard on the Red Stairs. A nurse in a Crimean uniform has been seen. Two builders working on the conversion of the old buildings to their present use saw the apparition of a Victorian lady – minus her legs.

As one patient lay dying, staff saw a dog on his bed. Once the man had died, the dog disappeared. The patient’s dog had died, at home, just before its owner died. 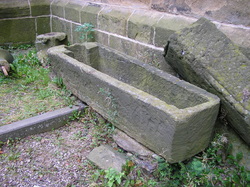 All Saints Church and churchyard at Ashover used to be haunted by a ‘headless woman’. The last sighting was in 1890, when she was seen in the north aisle of the church at 8 p.m.

One theory about this ghost derived from the unearthing of a human skull at Stubben Edge Hall, which is to the south of Ashover Village, when alterations were being made to the building some time between 1879 and 1889. At the time, it was believed that the skull had been taken from Ashover churchyard, as part of a wager 20 or 30 years earlier. Locals believed that the reason for the headless phantom haunting the churchyard was that she was looking for her stolen head.

An alternative story which might account for the sightings was that the ghost may have been that of a local who was bludgeoned to death with a hammer by her husband, John Towndrow, a farmer, in 1841, who then cut off her head and then finally cut his own throat.

An empty stone coffin at the church is also believed to be haunted and anyone wishing to hear the rattling of ghostly chains must walk round the empty coffin three times and then lie within it with his eyes closed. This apparently results in hearing faint sounds at first, becoming louder. However, as the coffin now lies up against the wall of the church tower, this is no longer possible.

In the 13th century, Leonard Reresby went off to fight in the Holy War and was captured by the Saracens. As was legal, his wife presumed him dead seven years later and duly decided to marry again. As she entered the church for the wedding service, there was the sound of the clanking of chains, followed by the phantom of a filthy and miserable looking old man. He was dragging fetters along with a painful moaning. Although most of the image disappeared, the rusty shackles and fetters were left behind, which, according to legend, were preserved for generations. It seems that Reresby had teleported himself to the wedding to give his wife his blessing for the occasion.

At the crossroads overlooking Ogston Reservoir, four women were travelling in a car about 8 p.m. one March. In the darkness, they saw a small figure dressed in an off-white smock, which only had the outline of a head and which was waiving its arms around madly. This headless figure has also been seen from time to time at that spot by other witnesses.