When visiting the site of the former Ashover Light Railway, the authoress Jill Armitage heard voices in the almost derelict Fallgate Station building but when she entered, she found there was no-one there.

Fanshawe Gate Hall, Holmesfield
Fanshawe Gate Hall is reputed to be haunted.   In the early 1960s, a cleaner called Sybil was vacuuming the upper corridor and felt someone tap her on her shoulder but no-one was there.   In the early 2000s, Trish Bowden was vacuuming one of the bedrooms when she felt someone touch her bottom.   It was so unmistakable that she thought she had backed into furniture but nothing was there.

During the 1990s, a lady driving down Flash Lane reputedly saw a lady in Victorian clothes, with no head, riding on a horse.   She was terrified and put her foot down but when she looked in her rear view mirror nothing was there!   A lady who lived near Jaggers Crossroads said she had seen the same thing before.

Darley Grange Farm on Flash Lane was once home to a mad lady, who would murder travellers who stopped for shelter and put them in a stone coffin in the cellar.   She was later hanged for her crimes.   Her ghost is supposed to wander the farm.   Also at the farm, fires seem to start by themselves and have caused some damage in the past.

Many locals are now afraid to use the road. 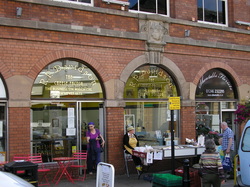 The central outer part of the North facing side of the Market Hall used to be occupied by Ford’s Bookshop. One morning, an employee of the shop saw a man heading towards the Children’s Department. downstairs – but the man was wearing a long-tailed coat and high collar, i.e. dress reminiscent of Victorian days. Another assistant saw a man walking through the shop who proceeded to walk straight through a closed door.

In late spring 1986, Geoff Cooper took a midday walk with his dog along a bridle path on the site of what had previously been Hornthorpe Colliery. When he was about 50 yards from the edge of Foxton Wood, he noticed a young collier walking behind him, wearing old-fashioned clothes and a white scarf. As his walk continued through and out the other side of the wood, the collier gradually got closer to him. At the point where he caught up with Mr Cooper, the image of the collier disappeared.

Freeman’s Temperance Hotel, Corporation Street, Chesterfield
The former Freeman’s Hotel was subsequently used as a furniture warehouse. During that time, poltergeist activity used to take place, in particular in the bedding department. Mattresses were sometimes seen flying through the air and in the stockroom, people would sometimes need to run out of the way as beds came hurtling down on top of them. There were also icy cold spots in the building, which has now been demolished.