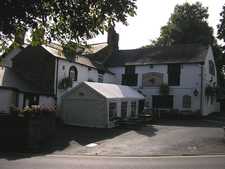 A house at Gladwins Mark is haunted by a man who hanged himself in one of the bedrooms over 40 years ago.   Many people who have lived there since have moved out not long after purchase.

In the 1990s, the Golden Fleece public house experienced PK phenomena involving the CO2 cylinders, the beer taps, cleaning equipment and a glass in the bar.

In 1993, at the author’s home in Gosforth Valley, within a short time of a newly acquired but second-hand home computer being connected to a portable TV, two controls mysteriously operated themselves, causing the TV to suddenly come on at full volume.

For another example of a strange effect associated with the transfer of a possession from one house to another, see ‘Chesterfield (Influence of second-hand furniture)’.

Goss Hall (formerly known as Gorse Hall) has a reputation for being beset with the smell of pipe tobacco smoke, which became particularly pronounced in the 1950s.

The Green Dragon Inn and Chantry Hotel have long been used as separate premises but the two buildings adjoin each other.   There is a tradition that the inn originally housed the chantry priests who prayed for the dead in the Parish Church opposite.  In the bar of the inn there is a medieval arch in the party-wall and a tunnel used to run between the two buildings.   The two buildings both have ghostly activity in the form of gas cylinders for the keg beer (but not the draught beer) being turned off, in the cellar.   In addition, at the Chantry, the lights are switched on and off, the fridge plug is pulled out and plates have been smashed.   On one occasion, glasses from the Welsh dresser flew across the room.

It is rumoured that an underground passage goes from the Green Dragon to St John’s Church, which is across the road from the pub.   However, the legend is unlikely to be true, as there is no actual evidence of this.