Leading up to November 1889, the residents of Oakbrook were being scared by the appearance every night of a ghost moving about the tombstones of the local churchyard.

In the mid-1920s what was reported as being a ghost was repeatedly being seen at midnight in Old Brampton Churchyard, accompanied by the rattle of chains.

The former Registry Office used to be used by the Social Services Department. as ‘The Offices of the Guardians of the Poor’. At that time, various members of staff heard the sound of footsteps, of buckets being moved and of mopping, as if a former cleaner were still at work in the building. On one occasion, the apparition of a cleaner dressed in clothes of a bygone age was seen by a cleaner actually working there.

In addition to this, various witnesses have seen a plant falling from the top of a cabinet, doors opening and closing and books being thrown around.

Although Brindle locates the Old Registry Office as having been at Union Walk, Pearson locates it as having been on Newbold Road. The evidence of Picture the Past indicates that Pearson’s location is actually the correct one. 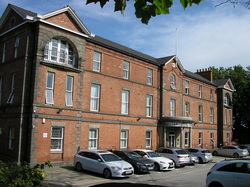 The original Chesterfield Royal Hospital is no longer in use, having been replaced by a new Chesterfield Royal Hospital at Calow. However, in the days when the former hospital was used, many nurses reported eerie feelings while on night duty in Nightingale Ward and some heard ghostly footsteps walking along the ward. One nurse heard the sound of running water and found that the taps had been turned fully on in the sluice room, even though no-one had entered the room that evening. It was thought that the ward was haunted by the ghost of a former nurse who had committed suicide after the death of a child in her care and that her spirit turns off the oxygen supply at times.

In Murphy ward (a side-ward later used as a storeroom), a sister walking past noticed a patient sitting in a wheelchair in the room, amongst various aids stored in there. She queried of the nurses who had put him in there but when they went back to look again, the wheelchair was unoccupied.

On one occasion, a local doctor visiting the hospital saw a patient wearing a surgical gown, as he entered via a side entrance. Puzzled, he followed the figure down the corridors but as he turned a corner, he found the figure had disappeared, even though there were no exits that the person could have gone out through.

Once, a porter, upon entering the mortuary, saw a man sitting up on one of the trolleys there. Upon quizzing him as to why he was there, the man floated up off the trolley and passed through the wall.

Early one morning, two nurses saw a mist over a bed where the patient had died, which then cleared. One of these nurses, whilst again on night duty, saw someone in an old-fashioned naval uniform in a ward, who becamse invisible. 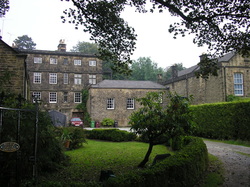 At a house built on the edge of the site of the former mental hospital at Old Whittington, known as Whittington Hall Hospital, ghostly images have been seen.

In 1956, a Pentecostal pastor and his wife were living at Overton Hall when the wife decided to leave, claiming that the hall was haunted. At the time locals thought the ghost was the third wife of one of the Jessops who used to occupy Overton Hall. The ghost was sighted walking across the grassy forecourt.

The hall was built in 1693 and has been used for a variety of purposes over the years, e.g. as a school, in addition to having been used as a private residence.

In 1887, at least 26 skeletons with broken skulls were found buried a few inches beneath the turf in the grounds of the hall, with no immediate clue as to their identity or date of death. They seemed to have been buried indiscriminately, as though in a hurry, raising the possibility that they may have been killed by the plague or as a result of violence. About 30 yards away, some coins dated 1742 were found.