Dark Lane, Calow
The ghost of a soldier killed during the Second World War is reputed to haunt a cottage at Dark Lane. Furniture has been moved around the house, apparently by this solder spirit.

Dock Walk, Chesterfield
At an office block on Dock Walk, in 2007, there were instances of the CCTV coming on by itself in the night, with orbs and lights appearing, which moved about. Also a drink spilled onto a computer in an empty, locked office.

Doe Lea
The medium Rita Rogers lived in a pit house at Doe Lea. She experienced various phenomena in the house, one of the most significant being the sight of a smoky mist appearing in the front room, which gradually formed into the image of a woman. Rita deduced that it was an earthbound spirit and clairaudiently heard her say "I buried my baby". She subsequently discovered that a former tenant had murdered her illegitimate baby and buried it in the cellar.

The following year a first aid box flew across a room before dropping on the floor, doors swung shut and heavy breathing was heard behind people's backs in a certain room. The owner's cat would be terrified of going upstairs and would always run past the stairs. Another cat took a disliking to the cellar door area.

In the early hours of the morning in May 2012, an old man was seen on the landing, hovering 2 feet above the floor and holding a candle and wearing a gown;  he was stood motionless and made no sound.

On the morning of the 19th July 2013 the owner's cat was run over on the road nearby.   The owners didn't know until two days later. On the evening of his death a child saw the cat run through the kitchen and out through the front door, despite him being dead.

In April 2015, the tap in the downstairs toilet would constantly turn itself on at full blast.   A plumber was called in but couldn't reach a conclusion about what caused the tap to come on like that.

The ghost of a man called Peter Tailor [pseudonym] (a former owner) has been seen and he has been heard talking from a certain room. Footsteps are also reported.


Dronfield (Footsteps and Skeleton Ghost)
In 1906 a young married couple went to live in a house in Dronfield containing a deep, uncovered hole, thought to be a disused well, in the cellar.

The first phenomenon experienced by the couple was that, whilst sleeping in separate rooms one night, they both heard footsteps going upstairs and then downstairs, even though everyone was in bed.

After this, unexplained knocking sounds were heard night after night in one corner of the room that was above the cellar. One night, the wife, detecting a presence in the couple’s bedroom, struck a light with a match and saw a ghost looking like a skeleton, looking and pointing at her. The fright of this caused the couple to leave the house.

Dronfield (Haunted Pub)
In the 1980s, the landlady, her partner and her staff witnessed object movement, footsteps and items being broken at a pub in Dronfield. Significant phenomena also occurred during a subsequent investigation led by K D’Raven.

Dronfield (Smell of Thyme)
According to a blacksmith in Dronfield by the name of Mr Markham, some people in Dronfield used to sight the apparition of a ‘lady of sweet-smelling thyme’. Witnesses would simultaneously smell thyme, regardless of the time of year of the sighting. 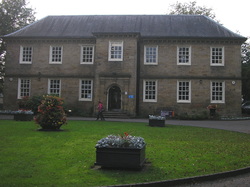 In 1967, the Manor House in Dronfield was converted from its use mainly as Dronfield UDC offices, with a small section used as a public library, to its current use exclusively as a library. This renovation included the reroofing of the building. Prior to this, the roof had windows in it and passers-by would sometimes see a white or grey lady looking out. It is said that one of the upstairs rooms, no longer extant, was always kept locked. 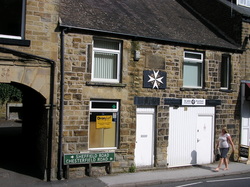 
The St John Ambulance Headquarters has experienced lights flickering, doors shutting and heavy footsteps, without explanation. During one presentation ceremony, it was reported that a photograph taken showed a bearded man not actually present at the time. It is claimed that it may be the image of a road accident victim 150 years earlier; however, an alternative explanation is that it may be a mark on the camera lens or film or a reflection.