In May 1987, Tom Bates, accompanied by three other members of the Elder Yard Chapel, unlocked the gates to the premises and he and one other companion unlocked the side door and entered the building, ready to set up for the usual Saturday coffee morning, leaving the other two in the yard just outside the door. As they entered the chapel, Mr Bates and his companion saw an elderly gentleman sitting in one of the pews, reading the newspaper. They went to the vestry to discuss the matter and quickly returned to the main body of the chapel, with the intention of asking the man what he was doing there – but the man had disappeared. Their colleagues outside said that no-one had left the chapel via the side door, the main door was locked and a search of the building revealed no intruder.

In 2009, at a factory in Unstone, machinery was in the habit of starting up on its own and footsteps were heard upstairs, when no-one was actually there.

In 1948, Dr Simon Bell was travelling along the road from Kelstedge to Uppertown (Kelstedge Lane / Eaton Lane / Lid Lane) at 1.30 a.m. one night, having been called out by a patient. He came across fog so thick it was impossible for him to continue driving and then the fog came into his car and started to choke him. He realised that something anomalous was happening and quickly drove away.

It is possible that this phenomenon was caused by an incident occurring at an earlier time whereby a resident set out along this road to seek a doctor because his wife was about to give birth. On that occasion, it was so foggy he was unable to find a doctor and, returning home, found that his wife and baby had died.

A farm at Uppertown is haunted by footsteps and one lady witnessed ball lightning fly down the farmyard.   Also, when the owner was ill, he used to be able to see two Puritan boys at the bottom of his bed. 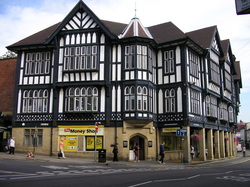 Victoria Cinema, Elder Way, Chesterfield
At the corner of Knifesmithgate and Elder Way stands a building which was used as the ‘Old Vic’ cinema and ballroom during the first half of the 20th century. In the 1980s it was in use as a supermarket and during that time, various members of staff became unnerved when visiting a store room, formerly used as the cinema’s projection room. Staff would sometimes feel someone invisible putting their arms around them and being squeezed.   It is suggested that this may be a replay of a horrible accident which once took place on the site in which a rope on a pulley somehow got wrapped around the waist of a young man, dragging him up to the roof and killing him.

In about 1985, several members of staff of a local carpet company were standing in the upstairs room of the supermarket (formerly used as the cinema), when a large piece of timber came hurtling towards them. They jumped out of the way and went to the balcony, from where it had appeared to come, but there was no-one there.

As part of an investigation by CPSG, the medium Mrs Edith Farrow, when visiting the troublesome room, sensed the presence of two men who had died in or near the building and two women, who seemed to have entered from outside. Staff also reported taps turning themselves on, the malfunctioning of electric lights and locked doors being opened and closed.

In about 2010, a visitor to the (upstairs) carpet store called Pete saw a person shaped shadow go past.


Victoria Inn, Stubley Lane, Dronfield
Throughout the 2000s, phenomena have been reported at the Victoria Inn, including footsteps being heard on the upstairs landing when there was no-one there, glasses being moved in the bar and electrical equipment being turned on and off.